Women’s Leadership And Empowerment: How We Can Follow In The Footsteps Of RBG, An Extraordinary Woman

“Fight for the things that you care about, but do it in a way that will lead others to join you.”

Supreme Court Justice Ruth Bader Ginsberg, fondly known as RBG, fought the good and just fight her entire life, including battling the cancer that finally led to her death on September 18, 2020. 2020 has been a tough year for so many of us personally and certainly as a collective society. Between the COVID-19 global pandemic, devastating fires and hurricanes, racial inequality and unrest, attempting to balance the economic and biological survival of our country and political division, RBG’s passing came as a big blow for all of us. 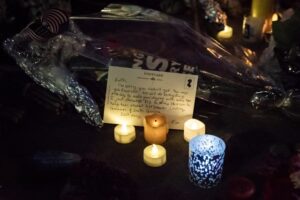 As a pioneer for gender equality and women’s leadership, champion for social justice and avid advocate for a fair and just political system, RBG was an inspiration for people all over the country. The second woman to serve on the Supreme Court, appointed by President Bill Clinton in 1993, Ruth began her career as a fierce litigator by day and an arguably even more fierce advocate for gender equality and women’s rights by night, working diligently on the ACLU’s Women’s Rights Project.

I went camping this past weekend at CAMP Experience, I was honored to facilitate two small breakout classes called “The Courage to Grow Your Life.” At dinner on Friday night, a fellow sister announced that Ruth Bader Ginsburg had passed away. My heart dropped recognizing the significance of her death, especially given the larger social and political upheaval we are faced with in our world today. I skipped the evening sessions and let myself go to my cabin and rest, feeling a deep grief, as well as the awe and wonder of this remarkable icon. I thought about my class and the teachings on courage. RBG represents courage. She is courage embodied. She moved in the direction of her dreams, working tirelessly with dignity and demeanor unparalleled.

Ruth Ginsburg inspired millions of people, which was made so apparent by the outpouring of grief, shock, confusion, admiration and even fear that came out for days in social media posts in the wake of her death. Although fighting hard for her life and seemingly trying to hang on until the next presidential election, it was her time to pass on. According to a NPR report, Justice Ruth Bader Ginsburg, Champion Of Gender Equality, Dies At 87, “Just days before her death, as her strength waned, Ginsburg dictated this statement to her granddaughter Clara Spera: ‘My most fervent wish is that I will not be replaced until a new president is installed.’”

In a Washington Post opinion piece, They couldn’t even wait until Ruth Bader Ginsburg was in her grave, author Dana Milbank writes, “Ruth Bader Ginsburg died Friday just before the beginning of Rosh Hashanah, the Jewish new year. She was not only one of the greatest jurists in our history, a pioneering defender of women and the oppressed, and one whose life story of love and perseverance inspired millions. She was also a Jew. You don’t have to be a Jew, or a believer, to see the symbolism — the loss of this great woman at the very moment that, in the Jewish tradition, God begins the renewal of the world — to know that there is powerful, spiritual meaning here that should call us all to reflection on the meaning of Ginsburg’s life.”

How We Can Continue To Carry RBG’s Torch

The posts and  pages of social media continue to carry the many messages that RBG stood for and resonate with my soul, however, it was this passage from Ladies Pass It On that struck me most.

When a woman like this leaves our mortal coil,

we owe it to her not to grieve,

not to weep or be sad.

We owe it to her to rise.

To all be a little bit more like her.

To be louder, braver,

so that the girls born today have new heroines to look up to.

That’s what she would want.

Will you rise? Will you try to be a bit more like RBG? Will you be louder, braver and a role model for girls today? Will you have the courage to go against what is the norm and fight for what is fair and equitable? If not us, who?

Women’s Leadership In The Wake Of RBG’s Passing

We all need support, community and strong women’s leadership now more than ever. If you’re struggling to make sense of so much senselessness these days, I invite you to connect with the meaningful people in your life and reach out for help if you need it. I’ll also be offering my UPROOT curriculum in early 2021, which is a 15-week program designed to help people powerfully partake in their lives, finding greater purpose and fulfillment in relationships, work and leadership. Again, as Ruth said so eloquently, “Fight for the things that you care about, but do it in a way that will lead others to join you.”

Here’s to honoring the legacy of a truly extraordinary woman. RIP RBG. Thank you for working so beautifully and diligently to help make our world a more fair and just place, promoting women’s leadership, empowerment of all people and serving as an inspiration to us all.

Let me leave you with the powerful words of Marianne Williamson, which she posted on her Instagram account just after the passing of RGB.

“The word “funeral” in Hebrew means to “accompany” or “to escort.” Ruth Bader Ginsburg escorted millions of us to a deeper understanding of our rights and responsibilities as Americans, and a grateful nation now escorts and accompanies her to the next phase of her eternal life. The somberness of the occasion is tinged with fear, much the way I remember the assassinations of the Kennedys and Dr. King. It’s a fear that without them here, bad things will happen that would not have happened had they remained. In the case of the Kennedys and King, much of what we feared has indeed come to pass… always making the anniversary of their assassinations even more painful. But with Ruth Bader Ginsburg we still have a choice. Her spirit of justice will only leave the earth if we fail to carry it forward in our own lives. Each of us can take into our hearts some of the dedication she displayed with hers. Each of us can say a simple prayer: that we might be a little more like her. In the end, we accompany her to her peaceful place in heaven as she has accompanied us to what can still yet be a more peaceful place on earth. May the march to justice grow stronger now, not weaker. And wherever she is may she feel our message: rest peacefully now, dear and glorious Ruth. We promise we will take it from here.”

With reverence for Ruth, a toast to women’s leadership and hope for us all,
Christy

By Christy Belz|2020-10-22T16:21:26+00:00September 30th, 2020|Encouragement, Personal Development, Professional Development|Comments Off on Women’s Leadership And Empowerment: How We Can Follow In The Footsteps Of RBG, An Extraordinary Woman

How empowered are you?

As humans, we are all impacted by negative patterns that hold us back in reactive and unproductive ways of being.

Take our 2-minute UPROOT quiz to discover how common root conditioning keeps you stuck. Start to build the self awareness you need to help you understand the conditioning that serves you well and not so well.